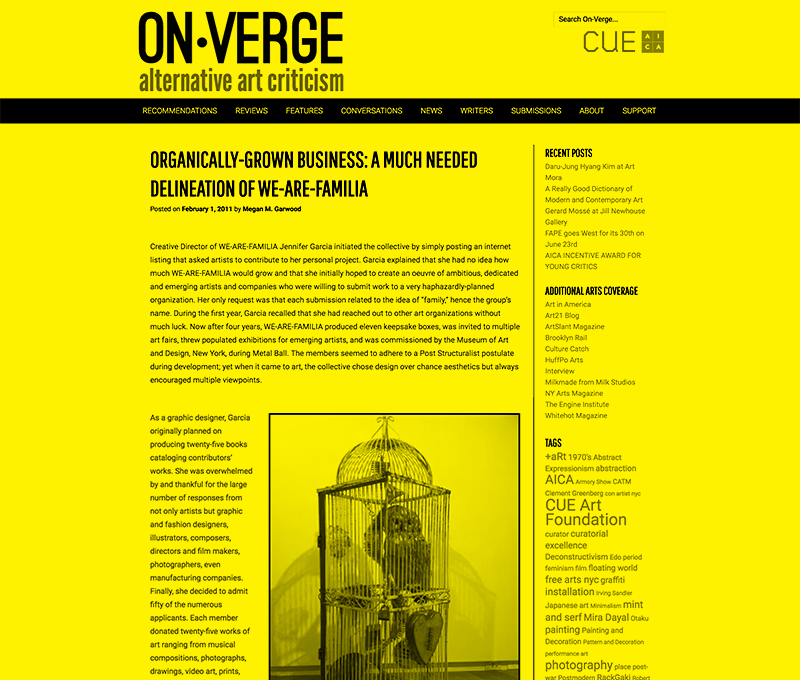 Creative Director of WE-ARE-FAMILIA Jennifer Garcia initiated the collective by simply posting an internet listing that asked artists to contribute to her personal project. Garcia explained that she had no idea how much WE-ARE-FAMILIA would grow and that she initially hoped to create an oeuvre of ambitious, dedicated and emerging artists and companies who were willing to submit work to a very haphazardly-planned organization. Her only request was that each submission related to the idea of “family,” hence the group’s name. During the first year, Garcia recalled that she had reached out to other art organizations without much luck. Now after four years, WE-ARE-FAMILIA produced eleven keepsake boxes, was invited to multiple art fairs, threw populated exhibitions for emerging artists, and was commissioned by the Museum of Art and Design, New York, during Metal Ball. The members seemed to adhere to a Post Structuralist postulate during development; yet when it came to art, the collective chose design over chance aesthetics but always encouraged multiple viewpoints.

As a graphic designer, Garcia originally planned on producing twenty-five books cataloging contributors’ works. She was overwhelmed by and thankful for the large number of responses from not only artists but graphic and fashion designers, illustrators, composers, directors and film makers, photographers, even manufacturing companies. Finally, she decided to admit fifty of the numerous applicants. Each member donated twenty-five works of art ranging from musical compositions, photographs, drawings, video art, prints, illustrations, designed goods and more. Her tentative plan morphed into twenty-five “keepsake boxes, but even boxes (think Duchamp’s “boxes”) could not contain the various forms of art.

Ultimately, Garcia and the fifty members agreed to produce twenty-five mementos. The “boxes,” which mimic furniture, are constructed by found objects, which hold up to forty original or printed and numbered works signed by creators. The first three constructions were crafted after Garcia and members rummaged through left-over materials in Brooklyn and Queens. These three sculptures were exhibited at Colette in Paris.

The viewing at Colette, being the American boutique in Paris, might have stimulated the upcoming and tremendous recognition WE-ARE-FAMILIA began to receive in the United States. Reed Space, Open Gallery and Fountain Miami (and later New York) directly contacted WE-ARE-FAMILIA and invited the collective to exhibit. Correlating with the main objective of WE-ARE-FAMILIA, to make the art world more of a family community, the collective always made each space its home. At Open Gallery WE-ARE-FAMILIA threw an event, complete with a bus to take patrons around the city until a small dinner was hosted by the collective—always emphasizing that not only members but also patrons and art enthusiasts are part of the familia.

Realizing that the “boxes” were much more than merely boxes, the members pursued to commission architectural and design firms to facilitate production, adjoining a completely new genre of art with the project. Nevertheless each keepsake box was personally cared for by the collective from design, composition and completion. Nearly all fifty artist received credit on each box.

Moreover, WE-ARE-FAMILIA started to collaborate with real-estate companies that offered free space for pop-up exhibitions. Beginning with a store front during last year’s Brooklyn Art Walk, the makeshift gallery was offered for the full summer allowing WE-ARE-FAMILIA to exhibit, as well as, to hold toy making work shops, sculpture exhibitions, et cetera. The collective is approachable, which makes it easy to post it in up-and-coming areas and revive art scenes where lack of resources impedes artistic development.

Subsequently, big-time developers caught on to WE-ARE-FAMILIA’s success. For example, MODERN SPACES, a luxury real-estate firm, most-recently, exhibited the work of Chris Mendoza (a non-member) in a duplex penthouse in Long Island City. Not only does this benefit WE-ARE-FAMILIA, but MODERN SPACES also uses exhibitions to usher more clients into available apartments. The trade off may seem a bit counterintuitive considering the collective’s grass-root, yet it claims no distinction among “Fine Art,” “Craft” or “Architecture.”

Therefore collaborations produce additional recognition. As the group attracts more attention and takes on advanced projects, its members prosper in their specific fields: an artist has been featured in a past exhibition at Guggenheim and a director plans to release his first feature film in Paris.

Considering the collective’s recent and massive breakthroughs, Garcia has admitted that she can not predict the future. Her dream remains to finish twenty-five keepsake boxes and to finally exhibit them in a retrospective. She has promised that WE-ARE-FAMILIA plans to continue to review proposals, accept challenges and support art communities.

Four years ago fifty strangers shared one thing in common; they had replied to Jennifer Garcia’s listing. Today they, along with numerous enthusiasts, help to define the robust concept of an international “art family.” Notably, WE-ARE-FAMILIA is derived from common Postmodern ideology; the collective’s structure has been assembled by chance and appeals to Pluralism. However, WE-ARE-FAMILIA celebrates the subjectivism of art and appears to abjure detachment of artist from work. With luck, similar groups may succeed meretricious art factories as fresh artistic formations—eventually, connecting art with community.